SEO: The straight edge message is not the biggest part of our music. With our music, we’re trying to inspire kids and make them think and open their eyes to the world so that they can be aware of what’s going on so that they can see it and make it a lot better.

INV: What do you hope to gain from people in both America and South Korea being exposed to The Geeks?

SEO: Korea is a really conservative country; there are a lot of mandatory things there… there’s so much pressure and I want people to be aware that there’s more than the limited sight in Korea. I really want people to be aware that there are other things out there and to think about bettering ourselves. For American hardcore kids… to know that there are things outside of America and that people can connect to each other through music.

INV: One of your songs is titled, “What We Believe”. What do you believe? What are some of the things that you hold dear in your heart and that are important to you?

SEO: I like that we can be friends just because we listen to the same really weird type of music, because this music has more than just words… it has a feeling and I’ve witnessed it with my own eyes. I believe that it’s more important than making profitable music and I really believe that we can be as one with this music. 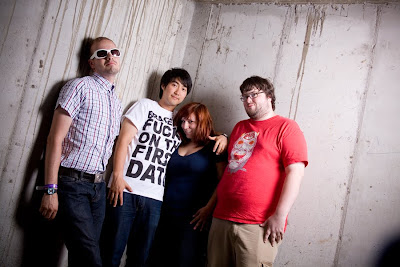 INV: What are some of your favorite bands inside and outside hardcore?

SEO: Oh, my favorite rock band is Nirvana, before I would listen to All 4 One and Boyz II Men, hip hop and R&B. Youth Of Today is my favorite hardcore band; they totally changed my life. The music, the lyrics, no question about it… everything about them changed my life.

INV: The Geeks have toured pretty extensively; where else would you like to see The Geeks go? What is the next level?

SEO: Next year is gonna be our ten year anniversary so we’re trying to release our next EP or LP and we’re tying to get a really big hardcore show in Korea. We’re planning to invite people from all over the world… we’ve done a lot but the scene in Korea is kind of stagnant and it’s not really growing, so we’re trying to make the local scene better. America has a lot of great venues, but people can’t be so DIY in Asia because it’s so much more expensive to rent a venue. It’s really different; it’s a lot tougher.

INV: As far as hardcore scenes go, Boston or LA?

SEO: Boston! [Laughs] Sorry… Boston is my favorite city in the world, besides Seoul. We haven’t been to Europe, but we’re trying to go soon.