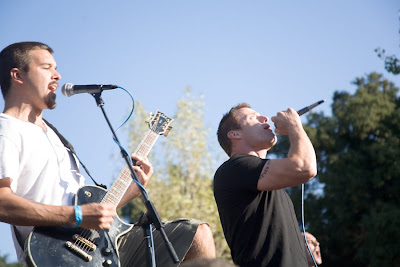 "Hey man, my name's Lionel. I'm scheduled for an interview with Zoli but can't seem to find him, any idea?"

"Zoli went to the hospital with throat problems about half an hour ago. I can do your interview... oh but I've only got 10 minutes, is that cool?"

The time line on my tape recorder reads 9:58, giving Ignite's Brett Rasmussen two seconds to shake my hand and exchange a "Go Dodgers" before running off to see if the Cro-Mags need his bass amp. He's busy, but accommodating, answering every one of my impromptu questions and not so much as tapping an impatient finger at my "uhh's" and "uhm's" (they tend to happen when you're using notes for an hour-long one on one with Zoli Teglas).

The following interview was conducted on Ignite's motor home at the Lisk Fest in Irvine, CA.

L: You've played some new songs lately. Is there a new Ignite record on the horizon?

B: We're chipping away a little bit, but we've been touring too much. Our band doesn't write well on the road. We need time at home and in the rehearsal studio to focus. We've pieced together a few songs, that's about it.

L: There was a huge break between ""A Place Called Home" and "Our Darkest Days." It seems like there won't be as much of a lull this time...

B: Dooooon't underestimate the situation *laughs*...

B: Nah, I don't know. We don't set time limits to the stuff. If we don't think the songs we have are great, we're not going to put them out. If it takes two months to write a record, cool. If it takes two years, cool. We'd rather put one great record out than a couple of mediocre ones with only a few good songs. We want to think every part of every song is amazing. The label's always going to pressure you with time limits, but we don't care.

L: Ignite has always toured extensively. How has touring changed in the internet age?

B: It's a lot easier now. There's so many more ways to inform kids that you're coming to play a show, and there's so much more connectivity. We used to have to wait for a fax from our European booking agent to find out what the dates might be, and we didn't have a fax at home so we'd have to go down to the record label to see if it came. Now we get an email as soon as everything is booked.

L: With so many diverse political opinions in punk and hardcore, were there any reservations about writing "Poverty for All?"

B: A lot of people see red stars on t-shirts that some bands wear and think Communist symbols are some cool political statement. Look at Cuba, North Korea, the former Soviet Union, the whole Iron Curtain, even China. Communism isn't cool at all! It's shitty for Joe Citizen. More people have died under Communism than any political system in the history of our planet.

L: Does it bother you that a lot of high school aged kids are getting into those symbols, reading the literature...

B: It's just kids not knowing. You can throw a swastika on a shirt and think it looks cool, but if you know you're history you know that's not a cool symbol. If people would just study how many more people Communism killed than Nazism, they'd be dumbfounded.

L: After all the acclaim for "Live For Better Days," is Ignite going to do more acoustic songs?

B: We want to do a whole acoustic record. We're trying to plan an acoustic tour in Europe in January to promote our DVD that we recorded over there, but I'm not sure that's going to happen. We'd love to do it though. A lot of our songs start acoustic to begin with, then get taken to practice and plugged in. "Live For Better Days" was exciting for us because it started acoustic and stayed acoustic.

L: Do you prefer writing about personal feelings or political rage? Ignite does both very well.

B: Political songs are good for the live show because they crowd fired up and give Zoli things to say, but I liked ["Our Darkest Days"] because we touched more personal stuff. I know what the stuff's about, and I know how the content of the song affected me or the other members of the band. That was cool for me because our agenda is normally environmental, social, and political.

L: Do you prefer the larger festival crowds or the smaller, more intimate club crowds?

B: It always depends on where we are. We played Costa Rica the other night in this tiny room, and it was like an old school show with pile-ons, stage dives, etc. We played a show in Japan that was "sold out" with 75 kids and the venue was the size of this motor home. It's all the same for us. We love to play the big shows and festivals in Europe because it's fun playing in front of that many people, like "whoa, there's 10,000 people watching you," but you play a little tiny club and the energy is awesome. To be honest, both have a lot of upside.

To that point, do you prefer going out on these big tours or topping the bill on a smaller one?

B: I like headlining. I like going out and knowing everyone is there to see us. We've been on tour with like, crazy random bands, like Goldfinger or Sevendust, and you have to go out and get it because none of those people have ever heard of you. We play a lot of these rock festivals where people in the front know who you are, but everyone in the back is like "who?" I have to admit, I like the challenge of winning people over. When we're headlining, I know we're going to knock it out of the park and blow everyone away. When no one knows you, you have to work hard to win people over.